Description
The Chanterelle has a funnel-shaped cap into which the stem merges. The colour varies from pale to dark yellow. The cap of the Chanterelle is about 3-10 cmacross.

Storage and shelf life
Do not keep Chanterelles for too long. They are best used on the day of purchase. Chanterelles must be stored dry in the refrigerator where they will keep for 5-7 days.

Flavour and use
Chanterelles have a herby and slightly peppery flavour which makes them ideal for sauces. They are also excellent in meat dishes, especially game. 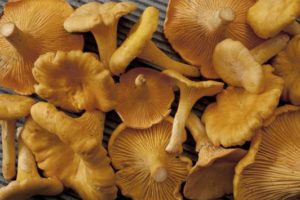