A truffle is the round fruiting body of a fungus and grows near the roots of specific tree species. Truffles are predominantly found in Europe, but also in China. Pigs or specially trained dogs are used to hunt for the truffles hidden underground.

Truffles are prized as the world’s most exclusive fungi and are often used as a culinary ingredient in top class restaurants. Nowadays, as well as in restaurants, truffles are also available commercially via retail channels.

There are three species of truffle: the summer truffle, the black truffle and the winter truffle. The Chinese truffle is less aromatic than European truffles and is therefore cheaper.

Truffles have an intense, earthy aroma and a highly characteristic flavour. They are considered to be an exceptional delicacy. The price and prestigious image of truffles places them firmly in the upper segment of luxurious treats. 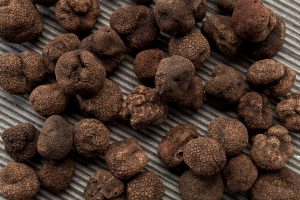