General
The Marron Chanterelle (Cantharellus tubaeformis) and the yellow Cantharellus lutescens are often called the autumn alternative to regular Chanterelles. The Trumpet Chanterelle has a grey to dark brown funnel-shaped cap. The yellow variant is generally slightly yellower, but both varieties are very similar. They grow in large numbers under conifers, mainly on moss, from summer (late August) to late autumn and into winter (February).

Description
The thin, hollow stem and the lack of a distinct smell distinguish these species from the ordinary Chanterelle. The underside of the cap, with the forked, branched folds of the Marron Chanterelle , is particularly similar to the ordinary Chanterelle. The yellowCantharellus lutescens has a yellow/brown cap with an orange/yellow underside, on which the folds are scarcely visible. They are not particularly fleshy.

Storage and shelf life
Brush the mushroom clean or wash under running water. It is preferable to brush them as the flavour of wild mushrooms is diminished when they are rinsed in water. It may be necessary to wash them if they are very sandy. When brushing, make sure sand does not fall into the gills. Cut a small piece off the end of the stem. The whole stem is very tasty. Chanterelles keep well in the refrigerator.

Flavour and use
Like the ordinary Chanterelle, the Marron Chanterelle combines wonderfully with game. (Use a combination of different Chanterelles.) 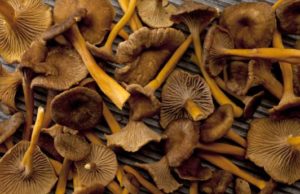