General
The Fairy Ring Mushroom is a small wild mushroom which appears in the summer and autumn. It can be found along verges, in wood margins, grassland, fields and heaths. It often grows in large numbers and in mysterious fairy rings.

Description
The Fairy Ring mushroom has a brownish-yellow umbrella-shaped cap and a shortish, creamy white stem. 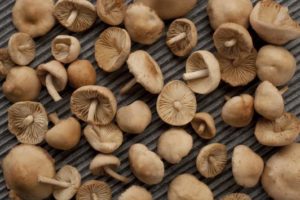