General
The Enoki is the cultivated version of the Velvet Shank mushroom (Flammulina velutipes). It is grown in the dark, with additional CO2. This keeps it pure white.

Characteristic of the Enoki are its long, thin stems. The wild version (the Velvet Shank) bears a closer resemblance to a normal mushroom than to an Enoki. The Enoki is cultivated and sold in small clusters.

The Enoki usually only keeps for a short time in the refrigerator – a few days at most, even in a non-shrink-wrapped pack. Leave the Enoki mushrooms in their packaging until you need them to prevent them from drying out.

There will often be a little of the growing medium attached to the base of the cluster. This should be cut off before use along with the sometimes slightly tough bottom part of the stem.

The enoki should always be heated and has a slightly fruity taste with notes of nut. The enoki is delicious in salads and on sandwiches, but also in hot dishes such as soups and sauces. 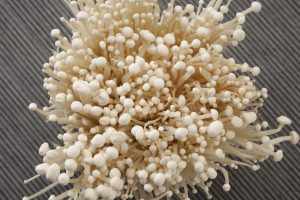